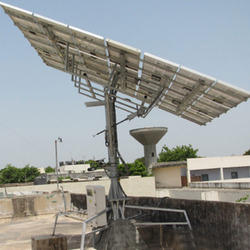 Sunlight has two components, the “direct beam” that carries about 90% of the solar energy, and the “diffuse sunlight” that carries the remainder – the diffuse portion is the blue sky on a clear day and increases proportionately on cloudy days. As the majority of the energy is in the direct beam, maximizing collection requires the Sun to be visible to the panels as long as possible.

The energy contributed by the direct beam drops off with the cosine of the angle between the incoming light and the panel. In addition, the reflectance (averaged across all polarizations) is approximately constant for angles of incidence up to around 50°, beyond which reflectance degrades rapidly.

For example, Single Axis Solar Tracking Systems that have accuracies of ± 5° can deliver greater than 99.6% of the energy delivered by the direct beam plus 100% of the diffuse light. As a result, high accuracy tracking is not typically used in non-concentrating PV applications.

The Sun travels through 360 degrees east to west per day, but from the perspective of any fixed location the visible portion is 180 degrees during an average 1/2 day period (more in spring and summer; less, in fall and winter). Local horizon effects reduce this somewhat, making the effective motion about 150 degrees. A solar panel in a fixed orientation between the dawn and sunset extremes will see a motion of 75 degrees to either side, and thus, according to the table above, will lose 75% of the energy in the morning and evening. Rotating the panels to the east and west can help recapture those losses. A tracker rotating in the east–west direction is known as a Single Axis Solar Tracking Systems.

The Sun also moves through 46 degrees north and south during a year. The same set of panels set at the midpoint between the two local extremes will thus see the Sun move 23 degrees on either side, causing losses of 8.3% A tracker that accounts for both the daily and seasonal motions is known as a dual-axis tracker. Generally speaking, the losses due to seasonal angle changes is complicated by changes in the length of the day, increasing collection in the summer in northern or southern latitudes. This biases collection toward the summer, so if the panels are tilted closer to the average summer angles, the total yearly losses are reduced compared to a system tilted at the spring/fall solstice angle (which is the same as the site’s latitude).

There is considerable argument within the industry whether the small difference in yearly collection between single and dual-axis trackers makes the added complexity of a two-axis tracker worthwhile. A recent review of actual production statistics from southern Ontario suggested the difference was about 4% in total, which was far less than the added costs of the dual-axis systems. This compares unfavourably with the 24-32% improvement between a fixed-array and single-axis tracker.

The use of a highly portable, efficient Dual Axis Solar Tracking Systems can be very useful to applications of the military, industrial, or residential variety. To produce an efficient solar generation system, a scaled down Read more…

Internet of Things-IoT Solutions Internet of Things (IoT) is a sprawling set of technologies and use cases that has no clear, single definition. One workable view frames IoT as the use of network-connected devices, embedded Read more…