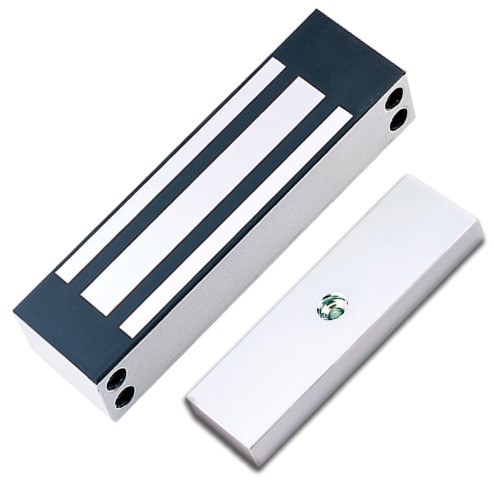 The Electromagnetic Locks are designed for ease of installation and long term operation. The ECHIP EL series offers magneticlocks with holding forces from 300 lbs to 1500 lbs, available in both single- and double-door models for interior, perimeter, and cabinet.

Typical single door electromagnetic locks are offered in both 600 lbs.(272kg) and 1200 lbs. (544kg) dynamic holding force capacities. A “fail safe” magnetic lock requires power to remain locked and typically is not suitable for high security applications because it is possible to disable the lock by disrupting the power supply. Despite this, by adding a magnetic bond sensor to the lock and by using a power supply that includes a battery backup capability, some specialized higher security applications can be implemented. Electromagnetic locks are well suited for use on emergency exit doors that have fire safety applications because they have no moving parts and are therefore less likely to fail than other types of electric locks, such as electric strikes.

The strength of today’s magnetic locks compares well with that of conventional door locks and they cost less than conventional light bulbs to operate. There are additional pieces of release hardware installed in a typical electromagnetic locking system. Since electromagnetic locks do not interact with levers or door knobs on a door, typically a separate release button that cuts the lock power supply is mounted near the door. This button usually has a timer that, once the button is pressed, keeps the lock unlocked for either 15 or 30 seconds in accordance with NFPA fire codes. Additionally a second release is required by fire code. Either a motion sensor or crash bar with internal switch is used to unlock to door on the egress side of the door automatically.

Compatible with any access control system, ECHIP Magnetic door locks meet the demands of security professionals, and the most rigorous building and fire life safety codes in the world. With no moving parts to bind or wear out, the Security Door Controls electromagnetic door lock provides positive, instantaneous release, whether caused by a signal from the fire command center, remote control or access control.