A PIR-based motion detector is used to sense movement of people, animals, or other objects. They are commonly used in burglar alarms and automatically-activated lighting systems. They are commonly called simply “PIR”, or sometimes “PID”, for “passive infrared detector”.

The PIR sensor is typically mounted on a printed circuit board containing the necessary electronics required to interpret the signals from the sensor itself. The complete assembly is usually contained within a housing, mounted in a location where the sensor can cover area to be monitored. 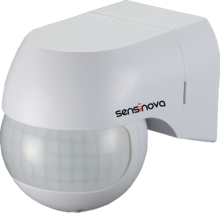 The housing will usually have a plastic “window” through which the infrared energy can enter. Despite often being only translucent to visible light, infrared energy is able to reach the sensor through the window because the plastic used is transparent to infrared radiation. The plastic window reduces the chance of foreign objects (dust, insects, etc.) from obscuring the sensor’s field of view, damaging the mechanism, and/or causing false alarms. The window may be used as a filter, to limit the wavelengths to 8-14 micrometres, which is closest to the infrared radiation emitted by humans. It may also serve as a focusing mechanism